We support this orphanage, that is also working as a boarding school for about 200 children. These children have become orphaned after the conflicts in Eastern Congo.

Mama Jeanne is an amazing woman who has been committed to the children of Congo for a long time. Even before the start of the war in the 1990’s Mama Jeanne was running a small-scale orphanage in Masisi (about 17 miles West of Goma) and it was during this time the founder of Hope In Action got to know her.

Mama Jeanne has made herself known through the years for caring for these kids as if they were her own. And despite having a big family of her own she always finds time for others. She cares for the children until they are old enough to start their own lives or until she can find a relative willing to care for them.

Until recently, a women’s center was situated next to the orphanage which was also run by Mama Jeanne. The two were naturally integrated which benefited both the women and the children. Unfortunately, due to an increase in orphaned children needing a place to be cared for, there was no space to keep the women’s center which today operates as an orphanage too.

Nominated for the Nobel Peace Prize 2015
As a confirmation of their well-managed, executed and engaging humanitarian work, partly during unsafe circumstances in a dangerous area of conflict, Mama Jeanne together with her co-worker Mama Jeannette and Dr. Mukwege at the Panzi hospital was nominated for the Nobel Peace Prize. In 2018 Dr. Denis Mukwege was awarded the prize.

In 2017 we were able to start building a new kitchen at the orphanages in Goma. After a hand grenade completely destroyed the kitchen, all the food had to be prepared outside over an open fire in the courtyard. After an extensive fundraising effort during the summer of 2017 enough money was raised to build a new kitchen. In the pictures our manager Mama Jeanne can be seen supervising the construction and symbolically laying the first stone.
We want to once again thank every one of our amazing donors!

The construction was finished in 2018, brick stoves and ovens made it easier to cook since only a fraction of the wood or coal was needed compared to before. Which vastly improved the efficiency and was hugely appreciated at the orphanage. Unfortunately there was not enough money to complete the dining room, something that was temporarily solved by the kids by taking turns using it and eating at the kitchen floor. Raising more money to finish the dining room is a priority since it could also be used as a classroom.

During 2018 toilets and showers were also built with the help of raised funds from Sweden and Norway. Two large water cisterns were also bought to which was a huge relief since there is no longer a need to walk long distances to a well to collect water. Without the water cisterns no showers could have been built, and good hygiene is key to prevent the spread of diseases amongst the children.

A new fundraising effort has been made to raise money to new beds, mattresses and blankets for the children’s dorms. The old beds are in bad shape and new mattress and blankets are always needed. The plan is to build new bunk beds in iron, made to last for a long time.

Mamma Jeanne is a very driven woman who understands that it is hard to rely on just donated goods. Therefore she has for years grown her own vegetables and roots, has a chicken coop to get eggs and from time to time be able to cook a hen or two. A few years ago she received two cows through a Norweigan donation which will help provide milk to the youngest children, about a deciliter every other day. A while back she was also given some pigs that have now multiplied. Through renting a field close by she has managed to grow enough corn and different kinds of beans to sell the surplus, the money she has made through that is used to pay the teachers and staff at the orphanage. Mama Jeanne trust the help of God and is a hard worker. She is affectionate and caring towards everyone, learn each child’s name, encourage them, hug them, and know all their troubles and accomplishments.

Mama Jeanne understands the value of giving the children a real education, so despite it being too expensive to send all the children to normal schools in the city where they need a uniform, she has it taken care of. On the orphanage’s grounds a school building with committed teachers teaching children from primary to middle school is situated. Several of the teachers are previous children of the orphanage now grown up, educated teachers teaching at the schools in the city, returning to the orphanage in their spare time to teach the children there as a thank you to Mama Jeanne.

But to be able to hire paid teachers, Mama Jeanne has opened up the school for children outside the orphanage as well. The surrounding area is very poor which means a lot of the children do not have the financial means to attend the schools in the city. At the orphanages school education is a lot cheaper and no uniform is needed. This has improved the relationships in the area and led to a decrease in theft of the orphanages crops and animals.

When visiting the orphanage we were moved by seeing several of the kids carrying their handicaped friends to school. When speaking to them they said “everyone wants to learn how to read, write and count even if they can’t walk!”

In 2019 Mama Jeanne’s orphanages became its own foundation in Congo! She wants to be able to be as independent as possible and are working tirelessly to do so. But she still needs some continued support from our organisation, with 5000 SEK a month and practical help with constructions and other things that might occur in this unstable part of Congo.

Find out how to donate money and become a member of Hope In Action LINK.

Translated from Swedish by Frida Jonasson 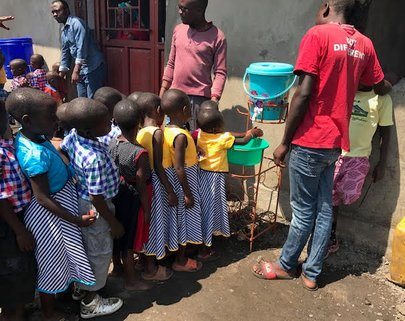 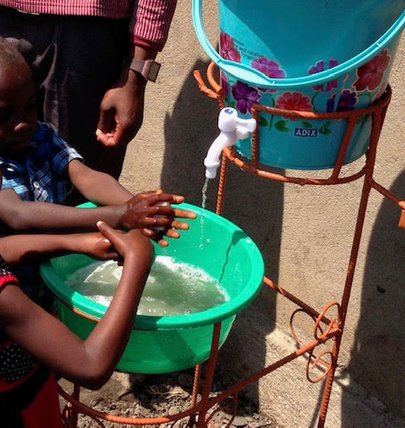 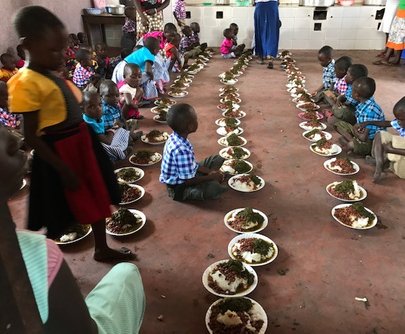 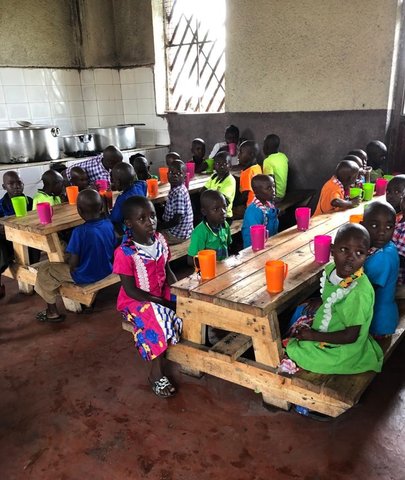